Rent a car at Heraklion Port 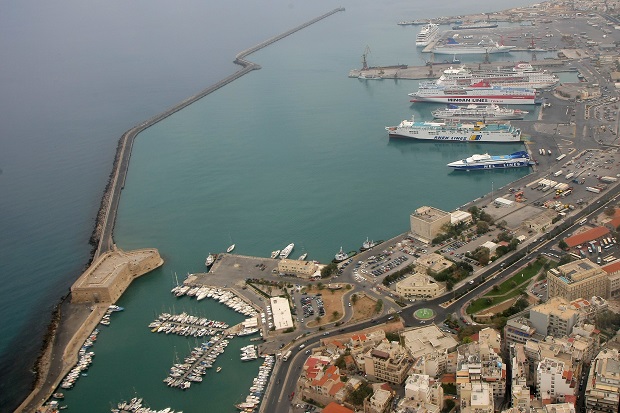 Heraklion port divided in the old Venetian Harbour and the new port for passengers and goods. The Venetian Harbour of Heraklion is located at the end of August, 25th Street of the pedestrian walkway that starts from the Center (Lions, called Meidani) and ends in Fort Koules. This is the old harbour of Heraklion, which today hosts boats and yachts, and his story is as old as the city of Heraklion. The new, modern passenger and cargo port begins East of the old one.

The Venetian Harbour of Heraklion

In the Venetian Harbour lies the fortress Koules and from here begins the long Jetty of the new harbour of Heraklion. The Jetty is favorite place promenade for the city's inhabitants, especially on warm summer evenings, when the sea breeze offers relief from the heat. The city's inhabitants with humor called the breakwater "Mpaϊpas Street", because many of those who walk on the Jetty are people who have been doing heart surgery (bypass) and the long walk in Mole ensure the necessary exercise that their doctors recommend them. Throughout the length of the Jetty you'll see anglers who patiently wait the fish bites, both day and night. In the middle of the breakwater works canteen with refreshments, ice creams and snacks. In the Venetian Harbour are also the Venetian "Neoria" (dockyards), i.e. spaces where Venetian ships were being repaired. Opposite the Koules, on the point that blend the yachts, there is the Cafe Marina. Behind her is the Heraklion Port and next to it there is a seafood restaurant. Here once stood the little Koules, who along with Koules which survives today, fylassan the entrance of the harbour of Heraklion.

Other two seafood restaurants, there are just beyond the area of the new harbour, there whence departing ferries to Santorini. Here there is also a big parking where you can leave your car to go to the Center or to walk to the port. Moving eastwards to the new port, there is a passenger station and the docks for the ferry to and from Piraeus. There are daily routes where the Ferries depart at night and arrive early in the morning, while the summer running and daily schedules. In recent years a special effort so that the port of Heraklion to offer modern services to travelers. Significant improvement is the new passenger station that makes the passenger pleasant stay at new installations with size 2,500 sq. m. The passenger Harbour station also have the ability to do the Check-in or Check-out for your flight from the airport of Heraklion. Also in passenger station you can store your luggage temporarily or to connect to the Internet wirelessly with your laptop. The new port of Heraklion receives 2 million passengers a year, both from the daily itineraries from Piraeus (Athens), Santorini and other islands, and from cruise ships that stop at Heraklion on a visit to Knossos and Heraklion City.

History of the harbour of Heraklion

The natural Bay of Heraklion, which formed over the centuries at the most important port of the Eastern Mediterranean, there was neither particularly large nor particularly deep and certainly no sheltered. The first port facilities remain unknown dating, nevertheless highly esteemed scientists acknowledge these laxeyseis ancient times. The first serious attempt to create organized port in the Bay of Candia was to erase all Arabic influence period (9th-10th). From one central position relative to the shipping lanes of the Eastern Mediterranean facilitated the Arab pirates pirate operations, and on the other the existence of Harbour served in the utilization of resources of Crete for their trade with Islamic countries. With the recovery of Crete in the lands of the Byzantine Empire in 961 a.d. the Candia gradually evolves into flourishing city with urban organisation and therefore confined and better organizes its port. When the island came into the hands of the Venetians (1204), the Candia (as named by the Venetians in Irakleio, Crete and whole) becomes the ' other Venice of the East "and is unique in Greece with the export trade in such a large scale. Mainly the last two centuries of Venetian domination was the most important port of the Eastern Mediterranean. Exportable products were mainly wine, cheese, honey, beeswax, silk, raisins, the mpampaki, oil and salt, which was under Venetian monopoly.

There is a bus stop (blue lines) just outside the port, from where you can easily find the bus for almost any area and suburb of the city but also for other prefectures of Crete. Buses are very cheap and very frequent routes. You can buy a ticket either in stop or on the bus. To get from the port to the city you can also take a taxi which costs around 10 €. Finally, an alternative way of transportation to and from the port of Heraklion is the boats, which operate as taxis in the Prefecture of Heraklion and offer day trips to small islets in the region or at popular beaches. Of course there is always the option to bring your own vehicle to rent a small car by car of the Pamediakopes.gr search engine, so you move more comfortable in large daidromes of Crete. Destinations from Heraklion port

Unfortunately, the most destructive interventions in the area of the harbour became in the 20th century, interventions which imposed new age needs to upgraded Heraklion in European standards. At a time when the notion of "monument" had no particular value, the car's penetration in the everyday life of the city led to the opening of the coastal road with breaking down a significant part of the Venetian port facilities (small Koules, Byzantine gate). The existence of coastal road fulfills important needs of citizens, but unfortunately once again the aesthetics and the history of the city were sacrificed for the sake of development and functionality.

Autocretecarhire.gr offer car rental services in island of Crete, the largest island of Greece. Offering great variety of vehicles we support your holidays in Crete, select the pick up and drop off location in all spots of Crete ( Chania Airport, Chania Port, Chania town, Rethymnon town, Rethymno port, Heraklion town, Heraklion Port, Heraklion Airport, Agios Nikolaos Port, Agios Nikolaos ) town and our team will make the best to provide you the best car rental experience. Our experience in Car Rental services in Crete, and the position of market leader at the island prove the high standards of service we provide to our customers.

Get benefit from our low cost car rental offers.

Our experience and position as a market leader at Car Rental services in Crete prove our mission for unique car rental experience for our customers.

Pick up & Drop off

Choose between 15 locations all over Crete for pick up and drop off the Car you have choosed to rent.

Every year we change our fleet in order to ensure high quality cars.

Excellent Car rental service in Crete. I picked up a Peugeot 207 CC from Chania Airport for 7 days. Good car hire offer, the car was in very good condition.

Very good condition of the car! Everything was perfect! They also gave as a Cretan souvenir, bottle of traditional "Raki" when we drop off the Car!

Hola Creta! We rented a Mazda Mx-5 for 8 days. Very friendly guys! We want to thank George and Gianis for everything. Hope to come back soon :)

We explored Crete with a Suzuki Jimny Jeep. Thank you autocretecarhire.gr for the professional service!

We rented a Toyota Yaris for 7 days during our holidays in Rethymno. We found a special summer offer for Car Rental in Crete. Although pick up location was Rethymno town they didn't have problem to drop off at Heraklion Airport.

We arrived at Chania Airport and the Car we had booked online from was waiting there. Very friendly stuff.