Hire a car and explore Heraklion 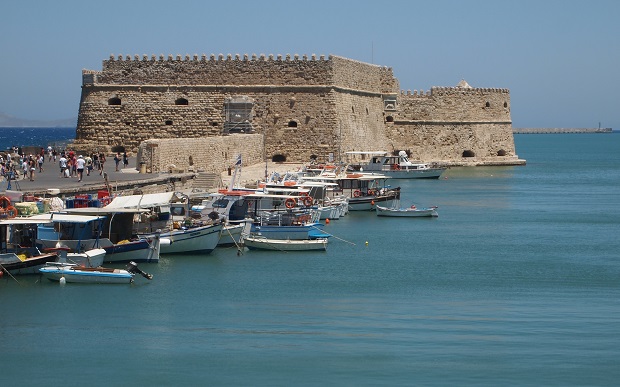 Heraklion is located near to Knossos Palace which was builded during Minoic Culture and had the greatest gathering of people in Crete. Heraklion city was builded in 824 when Saracinians occupied Crete with their commander Abu Hafez. They builded a big fort with a large circumfenetial moat around it and this gaved the city the name of Chandax.

The Saracens made the city of Heraklion the base of their pirate activities through other islands of Greece, that situation made the Byzantine Empire angry.

In 961 the Byzantines attacked the town of Candia, that time, Nikiforos Fokas forces slayed the Saracens and burned Candia. After they re constrycted the town and kept the command of the city for 243 years.

The Heraklion city in 1204 was boughted by Venetians through an agreement that made from the Crussaders. The Venetians improved the Heraklion's city fortifications with building a massive wall which largest part survives till today. The name of Heraklion town in Italian, Handaq as Sarakens named it was Candia. Several times the Cretans revolted against Venetians. On 8th of August at 1363 Cretans wanted to regain their freedom, through this revolution, by the participation of families like Venier and Grandoniko lead in to Cretans freedom.

In 1647 begun the siege of Heraklion City by the Ottoman Turks, a siege that lasted at about 22 years and during this period about 120.000 Turks and 30.000 Cretans died. This siege finally had as a result the conquest of the city at 1669 from the Kioproulou Fazil Ahmet. During the Ottoman period Heraklion was nowned as "Great Castle" or just "Castle". At this period a lot of Cretans died and was painfull years for the island and especially Heraklion City. Cretans of every gender and age was killed by Ottomans. As we know from historical books at 24 of June 1821 Turks killed in the "Great massacre of Heraklion" the Metropolitan of Cretan church Gerasimos Pardalis and 5 Bishops.

The city of Heraklion was liberated at 1898 and joined Cretan state at 1908 which by her side joined Greece at 1913.

Autocretecarhire.gr offer car rental services in island of Crete, the largest island of Greece. Offering great variety of vehicles we support your holidays in Crete, select the pick up and drop off location in all spots of Crete ( Chania Airport, Chania Port, Chania town, Rethymnon town, Rethymno port, Heraklion town, Heraklion Port, Heraklion Airport, Agios Nikolaos Port, Agios Nikolaos ) town and our team will make the best to provide you the best car rental experience. Our experience in Car Rental services in Crete, and the position of market leader at the island prove the high standards of service we provide to our customers.

Get benefit from our low cost car rental offers.

Our experience and position as a market leader at Car Rental services in Crete prove our mission for unique car rental experience for our customers.

Pick up & Drop off

Choose between 15 locations all over Crete for pick up and drop off the Car you have choosed to rent.

Every year we change our fleet in order to ensure high quality cars.

Excellent Car rental service in Crete. I picked up a Peugeot 207 CC from Chania Airport for 7 days. Good car hire offer, the car was in very good condition.

Very good condition of the car! Everything was perfect! They also gave as a Cretan souvenir, bottle of traditional "Raki" when we drop off the Car!

Hola Creta! We rented a Mazda Mx-5 for 8 days. Very friendly guys! We want to thank George and Gianis for everything. Hope to come back soon :)

We explored Crete with a Suzuki Jimny Jeep. Thank you autocretecarhire.gr for the professional service!

We rented a Toyota Yaris for 7 days during our holidays in Rethymno. We found a special summer offer for Car Rental in Crete. Although pick up location was Rethymno town they didn't have problem to drop off at Heraklion Airport.

We arrived at Chania Airport and the Car we had booked online from was waiting there. Very friendly stuff.